Source photo: https://svs.gsfc.nasa.gov/11262
Source solar wind mars: https://mars.nasa.gov/news/1869/nasa-mission-reveals-speed-of-solar-wind-stripping-martian-atmosphere/
Here is a fun photo fact. I found this photo of our sun creating a solar burst that is big enough to wipe out all life on earth, stripping earth of its atmosphere, water and life…cooking it at the same time. You didn’t need to know about that? Probably not, sometimes ignorance is bliss. In 2015 NASA made a statement that just such an occurnace happened to Mars and was responsible for its devastation, wiping out the Mars atmosphere and oceans. So…Mars is farther from the sun than Earth and still Mars was destroyed by the sun…so this is proof that this can happen to Earth too, which is much closer to the sun than Mars.
In the photo above you see an image of the earth near the solar explosion. This is just for size comparison. The explosion was big enough to destroy every planet in the solar system had they been hit. Its like tying a shotgun on a spinning top and seeing what happens.
The photo is dated May 3, 2013 and yet NASA tried hard to to publicize this information in order to keep the public from panicking. Eventually the solar explosion will head towards earth, but would NASA even tell the public it if knew of such a cataclysmic event? Probably not, it would only create more panic and fear.
Scott C. Waring 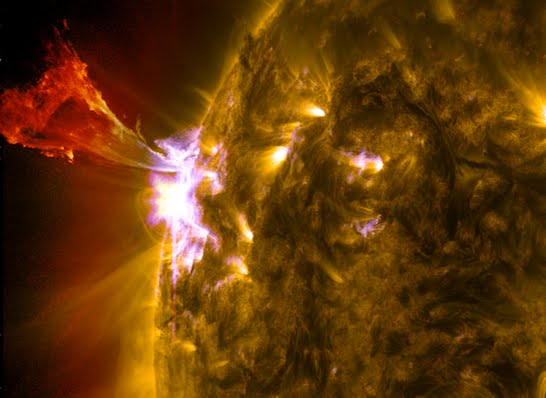